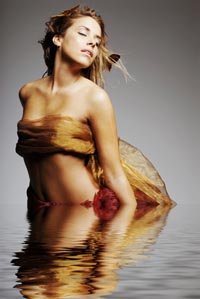 BEAUTIFUL women are being naturally selected for breeding, according to a University of Helsinki (Finland) study.

The Finnish study by Markus Jokela followed around 1,200 women and 1,000 men over 40 years, with date on number of children and attractiveness assessed from photographs taken throughout the study.

The study focused on the choices of men as to which women they would consider having sex with for ‘breeding’ purposes.
-- ADVERTISEMENT --

Results showed that women have got better looking throughout human evolution, whereas men have stayed more or less the same.

Attractive women were found to have 16% more children than their plainer counterparts, and were 36% more likely to have a daughter as their firstborn.

These findings are collaborated by a study done by Satoshi Kanazawa, an evolutionary psychologist at the London School of Economics, who found that attractive parents gave birth to far more daughters.

He argued that “physical attractiveness is a highly heritable trait”, which over generations leads women to become more aesthetically pleasing, developing into a ‘beauty race’,” that is still ongoing.

Studies also show that since there is no such hereditary trait in men, there is no evolutionary drive for men’s look to improve.