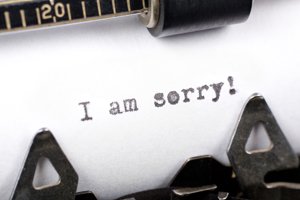 Many years ago I injured a man in a fracas outside a pub in Virginia water.

I was at the time being attacked by no less than eight yobbos’s and end result was I received three years nine months of imprisonment that ostensibly ruined my career. Where did I go wrong? Not by trying to protect myself. No way. Not by being in fear of my life. Never. And certainly not by pleading guilty to harming a fellow human being. You know where I missed out? I didn’t apologize! How could I have been so stupid? All I needed to do was apologize.

How did I not realize that apologies can get you off the hook whatever the circumstances? Politicians con hundreds of thousands of pounds from the tax payer and walk away if they say sorry.

‘Stars’ caught in all sorts of ‘flagrante delicto’ can apologize to their ‘fans’ and be forgiven. Popes can express their regret for paedophiles and consider the perpetrators exonerated, and presidents don sackcloth and ashes and plead forgiveness for receiving oral gratification in the oval office.

It appears that the human ego has now become so inflated that eating humble pie is considered the ultimate degradation. Sorry does indeed appear to have become the hardest word. Of course you only have to utter the dreaded adjective if you are actually caught! Until then you can gaily carry on doing whatever wrong your engaged in, safe in the knowledge that, in the event of the fan being hit, you can always indulge your final and often successful last line of defence, the degrading, ego deflating, prostrating before the alter – Apology.  Fine. So being sorry is indeed considered the ultimate act of contrition.

With all this in mind I’ve still yet to hear one Muslim, moderate or otherwise apologize for their fellow worshipers murdering 3,000 innocent people in the 9/11 twin tower attack. Now that really would be something. The truth is that they are too frightened of their extreme members to say even a word in that direction. I believe Islam is the religion of fear.  By bending to it and saying nothing, its moderates are condoning the act just as sure as if they carried it out themselves. Let’s see one of their high religious leaders stand up and publicly apologize for this horrendous act. We never seem to stop apologizing to them.

Obama’s administration has already apologized for the recent Koran burning threat. Why? Islamists make bonfires of counter religion publications all the time. Simply being in possession of the Bible can invoke the death penalty in some of their societies. We really have to stop kowtowing to these people; they only consider it a sign of infidel weakness. And as for Obama’s excuse that the Koran burning would further endanger the lives of the troops, just how much more danger does he have in mind? What pure unadulterated poppycock from this man, who I personally become more suspicious of by the day. Sometimes I really do despair of the lot of ‘em.