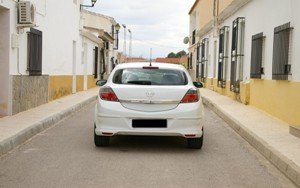 DOING the job I do, reliable transport is an essential especially when clients arriving on these shores often have no comprehension as to the distances involved when they have emailed and asked to see a few properties.

So a client may have asked to see a property in Baza, another near Lubrin and then hey let’s go to Velez Rubio.

‘Never buy a pig in a poke’ is a sensible saying but unfortunately when buying a second hand car privately it’s ‘sold as seen’ and so ‘buyer beware’. The bargain little Kia Rio estate bought a few weeks ago has turned out to be not such a bargain. The owner was honest enough to say it just needed a CV joint replacing or so I thought.

After a few weeks of driving the wheel bearings went leaving me stranded in Arboleas and needing a pick-up by the Grua. Dave from DB Autos was a star and replaced the bearings the same day and then also gave me the bad news that it was not just the CV joint but the whole drive shaft was faulty.

Luckily he knows a man that can so it was repaired rather than replaced and €350 later when the car hire was included the car was on the road again….. for just 48 hours!

The bearings went again on the same rear wheel in Arboleas and Dave when phoned put down his knife and fork, left his dinner on the table and drove for an hour to the rescue.

They had not thought anything of it at the time until they were hungry and replacing them for the second time for me. A spindle or some such is bent and needs replacing so that the bearings will not repeatedly fail in the future.

If I could I would use a bicycle or walk but there’s no room for passengers on a bike and clients don’t really want to walk hundreds of kilometres to see a few houses unless they are on a pilgrimage I suppose or raising money for charity á la Ian Botham.

Antas has its annual fiesta and so the town which seems to be inhabited by locals with no road sense is even more perilous to travel through at the moment. It must be all the orange blossom that affects their brains as I don’t think I have ever managed to drive through the main street without someone doing some illegal or dangerous manoeuvre (usually both) right in front of my car. Mind you, I don’t think this is peculiar to just Antas judging by the scratches and scrapes on most vehicles around.

Still on a driving theme the Mr and Mrs Magoos in their little holiday hire cars are getting fewer as summer draws to a close. We still have their relatives Senior y Senora Magoo on the roads with their little 250cc Noddy cars but at least they know they drive slowly and often drive considerately for other drivers half on the hard shoulder so that cars can pass. Maybe a bicycle is not such a good idea after all as being run over by a Noddy car would be a real embarrassment.

And finally while on my soap box I wonder just how people manage to learn how to park so atrociously? As a pet little photo project I have been taking pictures of the most novel offenders as its funny to see just how bad some parking can be. I don’t see the point in Spain of having white lines to separate parking bays in car parks as people again seem to use the line to centre the car on it and then manage to twist the car 45 degrees to the side as well for added effect.