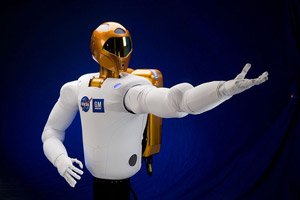 “Hello World! My name is Robonaut 2, R2 for short. Follow my adventures here as I prepare for space!” This was the introduction on the social networking site ‘Twitter’ last week, joining the ranks of space twitterers, including astronauts who tweet from orbit and the planetary probes that tweet from space.

R2 is already the most advanced dexterous humanoid robot in existence and will become the first humanoid robot in space, taking-up residence at the International Space Station via the shuttle Discovery on November 1.

It will be assisting astronauts with their daily tasks, especially repetitive tasks or those too dangerous for humans.

R2 was a joint project creation between NASA and General Motors that began in 2007, although he was originally intended to be an Earth-bound prototype.

However engineers sought to see how it fared in microgravity, therefore the robot will be sent to space, were its will receive upgrades and modifications as its creators learn more about how R2 operates in space.

R2 recently tweeted “I don’t have a voice. Twitter is one of the only ways I can get my story out.”