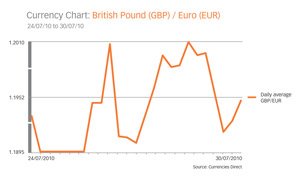 A strange question you may think but maybe not when you consider that if you invited 10 economists to dinner and asked them to forecast the economic outlook for Europe for the next 12 months, not only would you probably lose the will to live, but you would also get 10 very different answers.

Remember, you can count on one hand the number of economists who predicted the current downturn, so how can they really predict the upturn when it comes? The reason I muse upon this is that for the past month the economic data coming out of Europe and the is confounding the critics who indicated that the tough austerity measures would see another slump, as it in fact indicates that we could be seeing the famous green shoots of recovery.

The Euro has enjoyed a stellar July as it safely passed the bank stress tests, or as I call them, the exercise of rearranging the deckchairs on the Titanic. But whatever your view, the market certainly liked what it saw, even though many of us still have lingering doubts about the state of the European banking system… but hey “why let the facts get in the way of a good story.”

German unemployment fell for the 13th straight month in a row and manufacturing data points once again to growing exports for northern . Last month I highlighted the lack of safety deposit boxes in , and this was taken by some readers as a sign of a weak Spanish banking system. The point I was trying to make is the black economy is thriving, with an estimate of €17 billion being diverted out of the eyes of the tax man each year. Again it’s no coincidence that 85% of all €500 notes are in circulation in and I doubt many of them pass over the counter of your local Caja. So despite a crippling rate of unemployment above 20%, with most of this inflicted on the youth, is surviving.

In the the Bank of England’s main problem is inflation and as far back as March this year they said that the tough austerity measures to be brought in would curb this rate. Well that hasn’t happened; inflation continues to stay “sticky” and if anything looks like it may rise. The last BoE vote on interest rates even saw one member call for a rate rise to combat the inflation problem. It’s unlikely we will see a rate rise in 2010 but the threat of inflation is there and can’t be that much of a surprise since the BoE printed an extra £250 billion to keep the economy afloat.

Now the real basket case is the who are heading for a serious fall. Obama’s plan to chuck trillions of dollars at the economy is looking like a huge mistake. At a time when Europe and the are embarking on a series of austerity measures like the world has never seen, Obama is spending, spending, spending and “worrying about the bill tomorrow.” But that bill has to be paid sometime and since the meltdown in 2008, the already owes the rest of the world an extra $3 trillion. , which if measured as an independent economy would be the 5th largest in the world (yes really!) is effectively broke with many public sector workers being put on a 3 day week. So once again, all the economists who screamed about how the would lead the world……nil points!

The world is a very strange place at the moment and I have my own view. I think the world has changed dramatically in the past 10 years the real money is now found in , and the . We live in a facebook economy where employment can be found by recommendation and trends quickly established. The bloated indebted countries reside in the West, however if tough austerity measures are implemented they should survive intact. The Euro Zone still has a tough time ahead and needs a complete overhaul of its labour laws if it is to get youth employment on the rise again. However it’s not as bad as it seems…

But why listen to me? Economists are pointing to 2011 as another tough year when once again the World could tip back into recession………and they got it right before didn’t they?