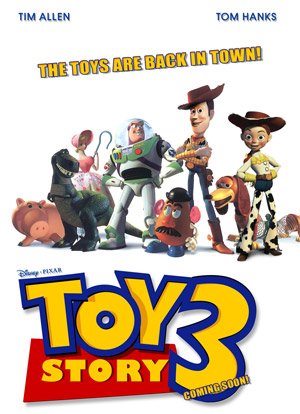 The much anticipated third installment of Toy Story has finally been released. After an eleven year break this Disney Pixar film is expected to be the must see movie of the year. This sequel deals with Andy, now 17 and heading to college, who must decide what to do with his toys. Woody believes that they should be happy to go up in the attic, as it means they are on call whenever Andy (or his future kids) needs them. The rest, however, believe toys are to be played with.

After much confusion, the toys end up in Sunnyside Day-care centre for toddlers where they are battered and bruised. Here we are also introduced to an array of new toys, most notably Lotso the bear (Ned Beatty) who smells of strawberries and Ken (Michael Keaton).

Despite these new and interesting characters they never detract from the original crew and we soon discover that these new toys are not as friendly as they may seem. They trap Woody, Buzz and co and this starts off their escape plan to get back to Andy. The day-care centre now resembles a prison.

The film may start slowly and but once this storyline is set in motion we know Pixar is back at its best. Along the way we are treated with some delightful comedy moments especially from Ken who insists that he is not a girls’ toy and Buzz manages to be transformed into a Spanish dancer.

However, among this laughter we are presented with a very sad finale as we prepare for what is sure to be the end of Toy Story.