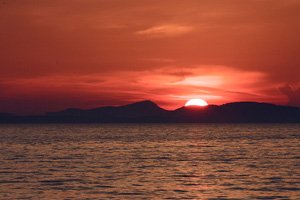 TODAY is the day six years ago that I finally moved to . Unlike some people who move here on a whim, or find themselves here by accident (we all know someone who says ‘I was on holiday here and I just didn’t get round to getting back on the plane’) my then boyfriend and I did do quite a lot of preparation before we moved.

We knew where we wanted to live, I knew what I wanted to do for a living as I had trained as a massage and beauty therapist, he’d landed a job as a second chef in a local restaurant. We had enough money to move, and we left a ‘get out plan’ waiting for us in . We were quite smart we thought, we’d prepared ourselves, what could go wrong? I know, I know! In writing this week’s column I’ve struggled to remember the order of events from the past six years, it’s all a bit of a blur. And some of it reads like the script from a disaster movie.

So, in no particular order, since 2004:  Ollie has been hospitalised with Reactive Arthritis which put him out of action for four months. We’ve rescued dogs, cats, and birds. I set up a successful beauty salon which I had to close when I was the victim of a hit and run incident. In 2008 Ollie realised a lifelong ambition to be on the radio when he was the newsreader on Luna Radio until it stopped broadcasting. We got married, the happiest and most wonderful day.

We’ve met con artists and professional criminals. We had our daughter. We bought a house. Last weekend we photographed some of the Spanish world cup winners at a private party. We’ve got through six kettles (one a year) the water here just seems to wreck them. We set up a magazine business which went bankrupt. We’ve worked for weeks on end on four hours sleep every night.

We’ve been to some of the most fabulous parties and been in the company of multi millionaires and royalty and we’ve been so broke we didn’t have enough money to buy a loaf of bread. We’ve raised thousands of euros for island charities. But best of all we’ve been fortunate enough to meet genuinely lovely people who would do anything for us, and us them.

Before the move I had visions of living on a finca with goats and chickens and the like. Far from it, but according to Ollie this might still happen. One day. If there’s one thing I’ve learnt it’s to try to take each day as it comes, and try to make the most of whatever is presented to you because as the saying goes, ‘God laughs at people who make plans’.  Happy Anniversary Mallorca, thanks for the ride.