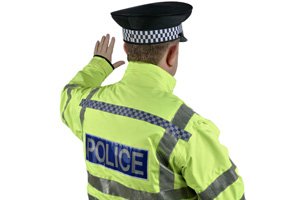 HERE we go again. Once more the `police find themselves on the defensive simply for doing the job they’re paid to do. In the light of the recent Moat affair, I personally thought a great deal of the media coverage (especially Sky News) positively disgraceful. Instead of congratulating the police on a difficult operation, carried out with courage and professionalism, they put on suitably ‘concerned’ expressions and proceeded to tut tut about the fact that the police had actually used a Taser in their endeavour to subdue the man. My. my, such unnecessary violence! Give us a break. Personally I wouldn’t have blamed them if they’d lobbed a grenade at him.

Here was an individual with a dangerous history, who murdered a man simply for dating his ex girl friend. He had then shot and gravely injured the girl and subsequently gathered a couple of mates together to hunt down and shoot a policeman, purely because he was a member of the force.

What did Sky expect the police to do when they cornered him, let Gazza join him for a couple of beers and sandwiches? In an endeavour to keep the story going (after all the star of the show is now dead and no longer newsworthy), Sky then produce the man’s brother, who, (although they hadn’t seen each other for ‘some years’!) proceeds to extol all with a lengthy tirade on what a wonderful man he was. He then, almost unbelievably, accuses the police of carrying out a ‘public execution’, because they didn’t take into account the fact that ‘the grass was wet’ when they fired the stun gun. Er… hold on a minute. Am I missing something? I thought he died from the bullet he fired into his own head. You really couldn’t make it all up. Now instead of resting easy in their beds and feeling a certain relief and satisfaction from carrying out a job well done, those involved in the operation have to steel themselves for a no doubt lengthy and undoubtedly costly enquiry into their actions. As far as I’m concerned they did a great job.

Well done the boys in blue, without you where would we all be? Congrats all around, lets hope the ‘enquiry’ is over and done with as quickly as possible, so you can all get back to the job safe in the knowledge that you can get on with it without the interference of all those tree huggers who have been allowed to attain such prominence under the regime of Herr Blair and Brown. A glass of the amber to ye all.

A quick congrats here to my lovely grand daughter Karina. Karina was recently selected as Miss Irish Sun, which paved the way for her to be one of twenty two girls in the finals of the search for ’s representative in the up coming Miss Universe contest. She came out third which was a wonderful achievement. Well done my darling. Chip off the old block ya see!!