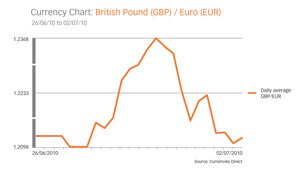 What a headline, and why such an optimistic tone surrounding the pound? Well we now seem to be in the camp of a global double dip recession and the markets are now worried about slowing down….aggghhh! Also the evidence that President Obama’s strategy of “if it looks broke lets throw at least a trillion dollars at it” has failed to spur on the economy. If anything it is storing up not only problems for the economy, but also the fate of the dollar that could see a rush for the door if the US economy trips back into recession.

The pound however at the moment is the least ugly of the three ugly sisters with the Euro and the Dollar being the other two. The coalition government has so far kept the ratings agencies, which are backing the austerity cuts in last month’s budget and believing that growth won’t be affected, at bay. Currency markets can be something of a smoke and mirrors affair and the pound has been given a bit of the old Paul Daniels magic despite showing the same symptoms as both the US and Europe; namely a huge fiscal deficit. Abracadabra… the markets are choosing to ignore this and are happily buying the pound.

Now the problems occur when the markets realise that potentially its all just an illusion, and then the pound could be in for a rough ride. But with the problems growing at a daily rate for the Eurozone, it’s unlikely that the market will fancy buying the single currency.

Here’s a thought for you, its impossible to rent a safety deposit box in , those in the know are hoarding their wealth outside of the banking system.

My prophecy is this: the pound in the past 18 months has been undervalued by about 30%, and as long as the collation government can continue to persuade the market that they are in fact Paul Daniels than one of the ugly sisters, then radiate beauty….

and the pound will soar!