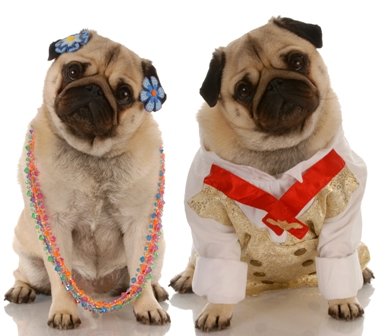 The canine heat or oestrous cycle varies in length. Many people know that their dog goes into “heat” but do not realize that unlike the human menstrual cycle, which is a non-fertile stage, dogs that are in heat are preparing to ovulate.

The canine heat or oestrous cycle varies in length. Many people know that their dog goes into “heat” but do not realize that unlike the human menstrual cycle, which is a non-fertile stage, dogs that are in heat are preparing to ovulate.

There are four stages of the oestrous cycle. The first stage is pro-oestrus, which is characterized by increased follicular activity of the ovary, a stage that is necessary prior to the release of the eggs. Outward signs include vulvar swelling and bleeding. During this time, your dog will be attractive to males but not receptive to them. In general, this stage lasts six to 11 days with an average of nine days.

The second phase is the actual fertile phase or oestrus. The female is now receptive to males and will stand for breeding. This stage generally lasts five to nine days, although it can last as long as 20 days and still be normal. Each dog is different and must be monitored closely. The end of this stage is characterized by the female no longer accepting the male.

The last two stages of the oestrous cycle are diestrus, a non-receptive time when the corpora lutea, which produce progesterone, are active on the ovary and anestrus. During anestrus there is no ovarian activity. Diestrus and anestrus are lengthy periods: diestrus lasts 56 to 60 days and anestrus is variable, but several months long. Most dogs cycle twice a year.

The next step in the course of the pregnancy is the actual conception. It takes about 62 days from the day that your dog is bred for the puppies to be born.

Confirming pregnancy necessitates a trip to the veterinary office. The earliest method of pregnancy detection is ultrasound. Most experienced veterinarians can determine pregnancy by simply feeling the dog’s abdomen about 20-30 days after conception. Large or obese dogs may be difficult to examine in any stage, however.

A third way to detect pregnancy is by taking x-rays. Foetal skeletons can be visualized at about 45 days of pregnancy. This test cannot be done until late in gestation, but it is nice to know about how many of the little creatures you can expect once the actual birthing occurs.

It takes an average of 62 days for puppies to gestate. During this time there is really not a lot for you do, just feed the dog regularly for the first month. Do not supplement your dog with vitamins during her pregnancy. Starting in the second month of pregnancy, you will want to switch her diet over to a good quality puppy food. This will provide her with the extra calories that she needs without providing excess supplementation.

There are three stages of labour. The first stage occurs when the cervix is dilating and there are some uterine contractions. You may notice some shivering, restlessness, panting, vomiting, and unwillingness to eat, and the dog may seek out a private place. If you do notice this stage, encourage your pet to go to the whelping area.

Stages two and three, active labour and placental expulsion, conclude with the expulsion of the foetus and the placenta, respectively. If your dog has more than one puppy, she will alternate between stages two and three. Once your dog begins actively straining, the first puppy is usually delivered within 10 to 20 minutes.

If the active straining has gone on for an hour unproductively it is time to call the vet. Many dogs will rest for an hour or so between puppies. This does not require intervention since the dog is not actively straining. Never pull on an ear or a foot; instead, try to hook your fingers behind the shoulders or over the hips and use very gentle downward traction. Most puppies are born with the amniotic sac intact. This membrane must be ruptured so that the puppy can breathe.

Dry the puppy and gently rub near the umbilicus to stimulate respiration. Use the dental floss to tie off the cord about an inch from the puppy’s body, and then cut it with the scissors and dip the end of the cord in povidone iodine.